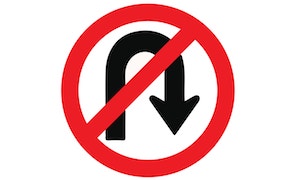 Police throughout Illinois commonly issue citations for Improper U-Turns. Even when the law permits you to make a U-Turn, you must always make sure that there are no pedestrians and that oncoming traffic has passed. The turn must be made from the proper location and lane. The law concerning U-Turns can be found under the Illinois Vehicle Code at 625 ILCS 5/11-802. Specifically, the law states:

U-Turns in Chicago often cause traffic accidents and injuries to pedestrians. As a result, the law concerning U-Turns in Chicago is stricter than in the rest of the State of Illinois. Specifically, if a motorist makes a U-Turn that results in injury, he or she will be responsible for damages, including medical care, vehicle repairs, and wages that were lost because of the injuries. If the officer determines that the offender was driving recklessly, additional charges could be filed.

Section 9-16-040 of the City of Chicago Municipal Code states:

Penalties for an Illegal U-Turn Ticket

A traffic ticket for an illegal U-Turn is a moving violation. Simply paying the ticket will result in a conviction. A conviction will appear on your public driving record and count towards a suspension of your driver’s license. If you are 21 years of age or older and have three moving violation convictions within 12 months, the Secretary of State will suspend your license. If you are under the age of 21, two moving violations within a 24 month period will cause a license suspension. Avoiding a conviction for an illegal U-Turn is important so that your driving privileges will not be impacted.

Increased insurance rates, fines, court costs and traffic school are all possible consequences of this offense. In addition, if you drive for a living, a U-Turn ticket could impact your employment.

If you receive a ticket for making an Improper U-Turn, contact the traffic attorneys at The Davis Law Group, P.C. to discuss your options. Our defense attorneys have the knowledge and experience to assist you in ensuring the best result possible. Our priority is to avoid a conviction and keep your record clean.

Contact us today to discuss the specific details of your case. We can explain your options by means of a free consultation. We represent clients on traffic tickets throughout the Chicago Area including Cook County, Lake County, and DuPage County.