Failure to Reduce Speed to Avoid an Accident 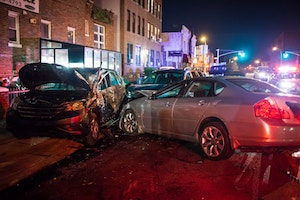 Failure to Reduce Speed to Avoid an Accident is the most common traffic ticket issued by a police officer after a traffic accident. This citation is especially common after a rear-end collision. Whenever an accident occurs, it is most likely that one of the parties will be issued a traffic ticket. The attorneys at The Davis Law Group, P.C. represent those ticketed as a result of a traffic accident.

Even if the police officer did not witness the accident, they will attempt to determine fault after arriving on the scene. This process typically involves evaluating the damage to the vehicles, speaking with the individuals involved in the accident as well as any third-party witnesses.

What is the Law?

Again, whether or not you were exceeding the posted speed limit is not a defense to this charge. Regardless of the speed limit, you must decrease your speed, even below the speed limit, at intersections, while approaching a hill or curve, traveling upon a narrow or winding roadway or even due to weather conditions. Your speed must be decreased to avoid striking a pedestrian or colliding with vehicles entering or on the roadway.

What are the Penalties for Failure to Reduce Speed to Avoid an Accident?

Failure to Reduce Speed to Avoid an Accident is a moving violation charged as a petty offense with a maximum fine of $1,000.00. There are a variety of possible outcomes depending on the specific circumstances surrounding your case. A conviction would result in a mark on your public driving record, high fines, and increased insurance rates.

A conviction for any accident-related offense, such as failure to reduce speed to avoid an accident, which resulted in an injury that required that the injured party was transported to a hospital may result in a suspension of your driver’s license by the Illinois Secretary of State.

You may be eligible for a sentence of court supervision to prevent the offense from appearing on your public driving record as long as certain conditions are satisfied. Conditions may include fines, mandatory court assessments, and the completion of a traffic safety school course.

It is important to note that a finding of guilty may be used against you civilly if the other party involved in the accident decides to file a lawsuit against you. A dismissal or finding of not guilty after trial is the best possible result.

Under certain conditions, a dismissal may be achieved if all witnesses fail to appear in court. However, a dismissal is never guaranteed and may only be offered under certain limited circumstances.

Whenever you are involved in a traffic accident , you are strongly encouraged to seek legal representation from a qualified attorney. The traffic ticket defense attorneys at The Davis Law Group, P.C. regularly represent clients ticketed for Failure to Reduce Speed to Avoid an Accident throughout Illinois including Cook County, Lake County, and DuPage County. Contact us today to discuss your case.