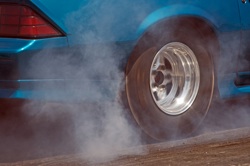 What is street racing?

What are the penalties for street racing?

A driver convicted of street racing is guilty of a Class A misdemeanor for a first offense and subject to a minimum fine of $250 plus mandatory court costs (second or subsequent offense carries a $500 minimum fine).

However, while many people understand that street racing/drag racing is a criminal charge, they do not know that a conviction results in a loss of driving privileges. In fact, a conviction for street racing will result in a driver’s license revocation by the Illinois Secretary of State. A license revocation lasts for an indefinite term, as opposed to a license suspension which terminates after a set period of time. In order to ever regain driving privileges, the individual must appear for an administrative hearing before the Secretary of State. At the hearing, the individual must demonstrate that they are not a risk to public safety. The Secretary of State may require that the individual drives on a restricted driving permit (RDP) before allowing the full reinstatement of their driving privileges.

As a result, avoiding a conviction on a street racing/drag racing charge is our top priority. Court Supervision is a non-conviction disposition in Illinois, which not only prevents the entry of a license revocation but prevents the offense from appearing on the driver's public record.

Under this same law, it is a Class B misdemeanor for the owner of a vehicle to allow their vehicle to be used for street racing. A second or subsequent violation may be charged as a Class A misdemeanor.

A driver convicted of street racing involving great bodily harm or permanent disability or disfigurement of another may be charged with Aggravated Street Racing, a Class 4 felony, punishable by a term of imprisonment of 1-12 years.

The traffic defense attorneys at The Davis Law Group, P.C. handle street racing charges in Chicago and throughout Illinois. Our attorneys also represent clients before the Illinois Secretary of State. Our practice extends primarily to Cook County, Lake County and DuPage County. Feel free to contact us if you have been charged with street racing or your driver's license has been revoked for street racing or drag racing.