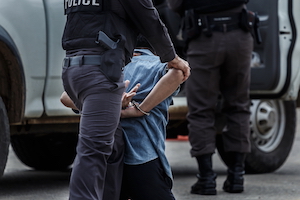 Allegations of Disorderly Conduct are common misdemeanor offenses that appear throughout the various circuit courts in Chicago and the surrounding area including Cook, Lake, and DuPage Counties. The criminal defense attorneys at The Davis Law Group, P.C., represent clients facing allegations of both misdemeanor and felony Disorderly Conduct charges.

Disorderly conduct is behavior that alarms or disturbs another or others, and thereby provokes a breach of the peace. Disputes between neighbors and alcohol-related behavior are often at the root of these charges. Other types of disorderly conduct such as filing a false police report can lead to felony charges and are viewed in a much different light than the less serious forms of this charge.

Our lawyers review all evidence to determine the best course of action. Often, as defense lawyers, we may effectively challenge a charge of Disorderly Conduct because all of the elements of the offense can be difficult for a prosecutor to prove. Police often use this charge as a "catch-all" to criminalize conduct that is seemingly unlawful but does not quite rise to the level of a criminal offense. If the prosecutor senses a weakness in their ability to prove this charge, a "deferred prosecution" offer may be extended. A deferred prosecution entails the completion of a certain amount of community service and a return to court to show proof of completion and, in turn, a dismissal. If the evidence is extremely weak against the accused for this offense, rarely the State may re-evaluate their ability to prove this type of charge, inform the Court that the burden of proof cannot be met, and voluntarily dismiss the case. If the evidence is weak, we may proceed to a trial by either judge or jury, and challenge the allegation(s).

If the evidence is convincing against the defendant, the case may result in a disposition of Court Supervision. Court Supervision may be a favorable outcome because it does not result in a public criminal record (Court Supervision is a non-conviction disposition). Defendants with a more significant criminal history may face other sentencing options including conviction sentences, i.e. Conditional Discharge, Probation, or a county jail sentence that can range anywhere from one (1) day to three-hundred sixty-four (364) days in custody.

Felony allegations of Disorderly Conduct are generally probation eligible. These cases typically involve the filing of false police report(s); a Class 4 Felony. If a defendant has a publishable criminal history involving other crimes, the accused may be sentenced to an Illinois State Penitentiary if the disposition results in either a finding of guilty after a trial, or a plea of guilty.

The criminal defense attorneys at The Davis Law Group, P.C. have decades of combined experience handling matters involving Disorderly Conduct, and understand the local courthouse procedures. We practice regularly with the Assistant State's Attorneys, local Clerks of the Circuit Court, and Judges. Feel free to contact us if you require legal representation for any Disorderly Conduct allegation or other criminal defense matter in Chicago or other surrounding areas.