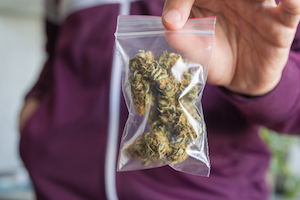 The drug possession defense attorneys at The Davis Law Group, P.C. have the experience and knowledge to handle any allegation involving the possession and/or sale of cannabis (misdemeanor of felony) that you may be facing in Chicago and throughout Illinois.

Under Illinois law, the possession of up to and including 10 grams of marijuana is a civil infraction, punishable by a minimum fine of $100 and a maximum fine of $200 (effective July 29, 2016). Possession of 10 or more grams is charged as a criminal offense according to the guidelines below.

Possession of 10-30 grams of cannabis is charged as a Class B misdemeanor.

Possession of 30-100 grams of cannabis is Class A misdemeanor, but may be charged as a felony for a second or subsequent offense.

Possession of 100-500 grams of cannabis is a Class 4 felony, but may be charged as a Class 3 felony for a second or subsequent offense.

Possesssion of 5000 grams or more of cannabis is a Class 1 felony.

Our attorneys thoroughly examine the evidence to determine whether or not your case should be taken to trial or challenged at a pre-trial motion hearing. In certain instances, the police violate the Fourth Amendment rights of the accused in order to locate and seize the cannabis. If this occurs, defense counsel can often challenge the arrest at a pre-trial motion hearing and prevent the State from being able to introduce the cannabis into evidence at trial. Normally, if the attorney defeats the arrest by winning this pre-trial motion, the State is forced to dismiss the charges against their client.

In the event that the evidence is not favorable for our client, we are experienced negotiators and can often resolve cases favorably through plea negotiations. Certain counties, such as Cook County, have programs that act as a form of deferred prosecution. Certain alleged offenders (if they have little or no criminal background) may be eligible to attend these program, and later return to court to show proof of completion. As long as the accused has not been arrested before the scheduled return date, and has a certificate of completion from the program, we may achieve a dismissal of the charge(s) for our client. Keep in mind, these programs are not available to all alleged offenders and are reviewed by the prosecution on a case-by-case basis.

For other individuals, misdemeanor marijuana possession charges may result in Court Supervision. This is a favorable outcome because it prevents a public criminal record and this sentence is not considered a misdemeanor conviction as defined by the Illinois Code of Criminal Procedure. For those that have a more significant criminal history, other sentencing options include sentences that are defined as misdemeanor convictions, i.e. Conditional Discharge, Probation, or a county jail sentence that can range anywhere from one (1) day to three-hundred sixty-four (364) days in custody.

Felony allegations of cannabis possession or sale are generally Probation eligible. There is a special type of Probation known as 710 Probation (a “first offender” probation) that allows the conviction to be expunged upon successful completion of the sentencing terms and conditions set forth by statute. However, a defendant with a long history of drug or other criminal offenses may be sentenced to an Illinois State Penitentiary sentence if the case results in a finding of guilty after a trial or a plea of guilty.

In cases where the prosecutor makes an offer that is either not favorable or unacceptable to our client, we often engage in a conference with the Judge and the prosecutor. This is commonly referred to as a 402 conference, and we regularly participate in these conferences if plea negotiations are unsuccessful. Under these circumstances, our legal team has an opportunity to inform the Court about positive aspects of our client’s lives, rather than having the Court focus simply on the charge itself. This is a way for the Judge to get to know the Defendant in a different light. This often impacts the Court, and a more appropriate sentence will often be achieved through this method. However, if the client is not satisfied with the recommendation made by the Judge, he/she is free to reject that recommendation and preserve their right to have a trial by either a judge (bench trial) or a trial by jury.

The defense attorneys at The Davis Law Group, P.C. have years of experience handling matters involving marijuana possession or sale, and are familiar with the various courthouse procedures, Assistant State’s Attorneys, Judges that preside throughout the circuit courts, and local Clerks of the Court. Feel free to contact us if you require legal representation for any cannabis-related or any other criminal defense matter throughout Chicago and its surrounding area including Cook County, Lake County, and DuPage County.